I’m sorry. I know I’ve been underground lately. I’ve been busy and I’ve been depressed. I’ve had zero energy and less inspiration. The thought of having a phone conversation or trading texts or emails has been too much up to this point.

Natalie’s 8 month anniversary hit me hard. They all seem to do that. By the time I feel like I’m coming down from the height of the grief, it’s another 19th. The Tattoo Convention was in town the first week of January? I’d planned on going with Shar, until I remembered I hate crowds and people and all that junk. Instead, we decided to get matching tattoos. A dolphin on the ankle to represent support and fun. Shar took a basic design and added into the tale, the word “sis”. After the ink was completed and we were walking back to the car, I just happened to pause and look up. In the second story window, in a house on the sidewalk, was a pink heart. Natalie’s symbol to me. 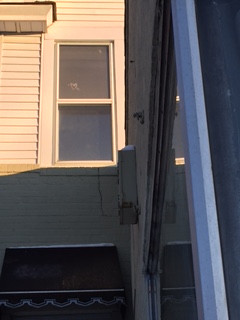 I dropped Shar off at her house and as I headed for home, there was a nagging in my stomach. I’d gotten an estimate for my elephant tattoo, it was reasonable but would have to wait… We live less than a mile away from a tattoo place that I’d never been before. I pulled into the parking lot and not knowing what to expect, went inside. It was a small shop but clean and … interesting looking. Someone greeted me right away and asked what he could do for me. I showed him the drawing of the elephant I wanted and asked for a price. I was floored when he quoted me half the price I’d heard hours before. He added to my surprise by telling me he could get me in right away and estimated it would take about 10-15 minutes to complete.

I was nervous. How good could the quality be for half the price? Are they saving money by reusing needles? I took a deep breath and told myself at the very least, I’d have a story to tell… I pushed the thoughts aside and hopped onto the table.

“So how long ago was your last tattoo?”

“About an hour ago.”

I hiked up my jeans and revealed a bandaged ankle.

“Damn! I like your style. I don’t believe I’ve ever heard that answer before…”

I smiled, amused at how my impulsiveness worked out so well.

True to his word, ten minutes later we were done. I was a little nervous to look in the mirror but was relieved when I did. He’s soooo cuuuuuttttteeee! 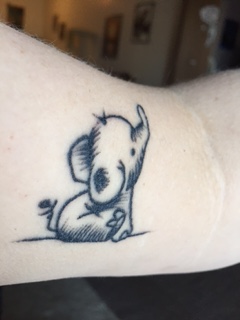 There is still much more to update but I’m afraid if I don’t get this out right now, I won’t get it out at all!