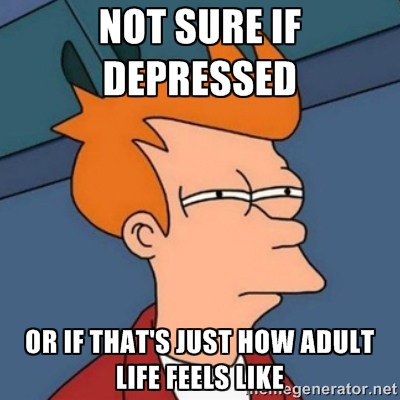 This whole adult-thing, it’s not nearly as cool as I thought it would be. I’m not ever sure how it happened. I hope someone lost their job over it… letting me fall through the cracks in the system. No one asked me if I wanted to grow up (ok, lots of people probably did and I’m sure I enthusiastically agreed). There was no training manual. No crash courses. If I’d known… I wouldn’t have done it. “Being an adult is like looking both ways before crossing the street and then getting hit by an airplane.”

Yeah. So there’s that. I’m sure I’m feeling my age extra hard as my “baby” will be 13 in just over a week. Thirteen. So I have that to deal with. On top of finding a place for us to live. Dealing with asshole insurance companies who are refusing to pay for services because I “make too much”. Tell me how that works when we’re so close to the poverty line… There’s family stuff, there’s work stuff. There’s relationship stuff. I’m about – far away from repeating a mantra I learned in treatment. “Two tears in a bucket, mother fuck it!”

But it’s late. I’m tired and I need my meds and some sleep. The only reason I’m still up is because I made a commitment to posting twice a week on Wednesdays and Sundays and I’m an adult and that’s what we do.